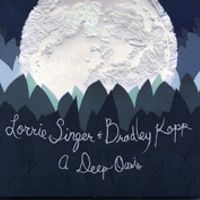 From the recording A Deep Oasis

The opening line of this song pretty much says it all. My mama just didn't have a handle on how to manage money. For my folks like most folks back in "the day", it was usually the husband who made the money and the wife who managed the household. My dad used to shake his head and say "your mother thinks that as long as she has checks in the checkbook she has money in the bank". Well, tell that to the grocer, the dry cleaner, the department stores. It's only fair to mention here that to her credit, in my mother's way-too-short lifetime, she was also an award winning film producer, successful business owner, stage and screen actor, voice actor, singer and artist whose wonderful oil paintings fill our home. She also went out on the deep seas with Jacques Cousteau and talked on the phone til all hours of the morning with Mickey Rooney... but that's another story. She'd take all this in the spirit it was intended and laugh all the way to the bank. ls

He's working hard to bring home the bacon
She's spending all the cash he's making
At the end of the day there's only one thing he can say
Oh no, where'd all the money go?

Mama was a real homemaker
She had a chauffeur just to take her.
She hired a cook, she hired a maid
She never wondered how they all got paid.

Meanwhile Daddy's treading water
Wondering why he married the boss's daughter.
When did life get so hard? When he gave her that credit card.
Oh no, where'd all the money go?

It disappeared right out the door to Versace and Dior.
Somehow it managed to find its way to Neiman Marcus and Cartier.

You get the picture - Mama's on a roll
Daddy's gotta stop her 'cause she's out of control.
He says "sweetie, sugar baby, honey....get your hands off all my money!"

She said hey, now listen honey:
I'm gonna get back all that money.
I found a way to get us out of hock - I put it all in Enron stock!
Oh no, where'd all the money go?